What if money was no object?

What is it you would do?

I'm completely fucking serious. It's so good, and I don't even read sci-fi. It's so good, it makes me think to forget even trying to write short stories. It's so good it will make you really happy just to read it, if not tear up a couple of times, if you're at all like me.

It's so good that it's made me post twice in one day. This does not happen often.

This is the headline The Age has online for this news item. I'm happy to read today that Chris Lilley has a new project and that a 'new-look' ABC will be hosting it. Sometime. Soon, I hope. But the headline in The Age might have Lilley lodging a complaint because it seems to suggest that Angry Boys was not a success and that Lilley needs resuscitation.


I don't think Lilley needs reviving. To me, Angry Boys was genius partly because lots of people didn't seem to get and it were made uncomfortable by what they perceived as the content rather than being aware that their discomfort was because they couldn't get the satire and the rationale behind doing it the way he did. People wanted more of Summer Heights High but really, while I loved that and thought that brilliant as well, he had to do something else, something different, something more.

I'm a definite Chris Lilley fangirl, for sure.

If people don't get something, that's their own, um, I want to say stupidity, but I will say lack, rather than the problem of the creator.

The second complaint of the day is the letter send by one Julia Gillard to the Fairfax chief. I love it, the way she lays out very clearly what happened. Again. This is not for the benefit of dullard journos, oh no. Nor is it for the education of opposition politicians. They all know what's what, that's for sure, but they aren't letting truth get in the way of what Gillard's describes is a witch-hunt. No, the letter is for the people, the voters, so they can see that Gillard  has nothing to hide and did nothing wrong.

It's just a matter of her hanging in there, I think, for another couple of days.

And how about the Libs getting Julie Bishop to do all their dirty work this week, because you know 'if we get a woman to do it, then no one can call us misogynists.'

Do they really think we are that stupid?*

Email ThisBlogThis!Share to TwitterShare to FacebookShare to Pinterest
Labels: Chris Lilley, the stench of politics

While I wasn't one of his 'readers', I did read The Power of One years ago and I have to say, some of the scenes, particularly descriptions of place, still pop up in my head from time to time. That's pretty powerful, to be randomly taken back to a couple of passages that you read a long time ago.

This goodbye made me weepy, especially when his voice goes at the end.

Happy Monday. A little early you say? Never too early for Hem and cocktails... 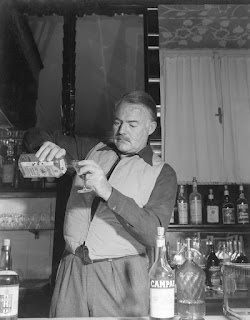 I have to say, I don't think the words 'cocktails' and 'Hemingway' go together. Surely it would have been drinks? To read about him and his favourite cocktails, see Philip Greene's article in the Huff Post.

Love this pic too, I think he's on his boat The Pilar. I like to think it's The Pilar anyway, look how happy and relaxed he is. 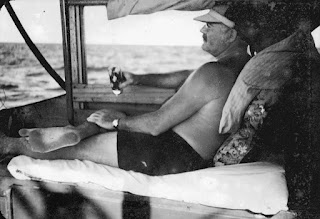 This week has been busy. Finished off programs at three schools, and then on Friday evening, met Clokes in at the Martini Bar in the city.

I had two. First one was Grey Goose, second Imperia (as recommended by Mr E in a previous post.) I asked for them very dry, and they were okay but could have been colder. They weren't that cold at all, but they were stirred and not shaken and the olives were enormous green ones - delish.

Then we rolled up the hill to Flowerdrum. We had never been before and it was as good as I expected. Despite Gilbert Lau selling it (I think he still acts as adviser?) it seems the place has retained its charm and quality, though I can't compare. What I liked about it: the waiting staff were excellent and the sommelier deliciously casual and cheeky; the in-between courses hot towels on little silver trays; the generous servings of each course (we had a 6-course banquet, and there were four of us: this was an end-of-of year celebration dinner for our new business so it was me and my partner and our supportive, lovely husbands); the glassware; the cutlery; the way the tables were so spaciously positioned, you felt miles away from the other tables which makes for a very luxurious, special feeling.

We had three bottles of wine including a nice Henschke, not a Hill of Grace before anyone gets excited. And the bill came to under a thousand (just). Far out. But that's what we would have spent on a Christmas Party, say, for a staff if we had a staff. Mmmm, might be a reason to keep the biz small so we can have our annual thing at Flowerdrum rather in some tacky marquee in our backyard with sausages on the BBQ and Yellowglen on ice in the wheelbarrow.

THEN yesterday I had a writing thing. The best thing about this was: meeting (and hopefully making some sort of impression) on a writer that I admire. I negged him about his e-reader (see The Game, Neil Strauss) and poo-poohed one title he suggested for his next novel. This was at drinks, afterwards (see, even that impressed me, that he would spend that time. Most writer-teachers run away afterwards). I think I scared him a little when I brought out my copy of his book and asked him to sign it (typical fangirl but why not?), and THEN again when I said that I'd blogged about him and he'd emailed me saying 'thanks for reading, glad you liked it but what do you mean a bit of a spunk?' heh heh BUT I am hopeful that overall I didn't freak him out too much. Also he agreed to assess my ms if I want him to (paid) and I think I really would like him to, so that he sees my stuff primarily and then also to get his feedback. That would be ace.

So, this weekend thus far: Mission accomplished. Now to revisions for the agent, have to get them to her in January and someone needs to have a look at it (fresh eyes) (Alex?) once I've done revisions and before I send the full thing to her again.
Posted by Melba at 10:17 am 16 comments: 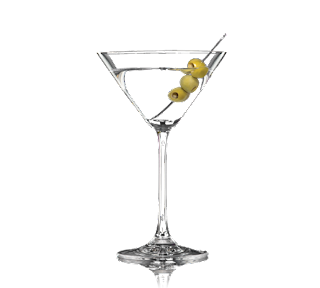 Now you've got me going. I have been re-arranging my work space and getting all paid-work stuff out in to another bookcase so I can consolidate and tidy my non-paid writing space. While toiling, I kept in mind to watch out for a certain book on a certain topic.

A few years ago, I bought MARTINI, a memoir by Frank Moorhouse. I have never read, never much looked at it but I liked having it, knowing I possessed a book that was entirely a love-letter to martinis.

This is the table of contents:

Martini city
The story
The pageant of learning
Email to Ophelia in New York
The venerated craft
A captivating observation
The question of coldness
This thing called gin
The vodka option
The lost vermouth
A disturbing observation
The breast: the bra: the glass
The olive and the lemon tree
The diamond: the pearl: the acorn
'The olive on the toothpick gives the drink an axis'

Don't you just love it? The mention of 'this thing called gin'. Is he going to be pro or con? And the coldness; Mr E you are specific about coldness. And finally, the olive versus the lemon (I guess) is what that section refers to.

They had a date with fate in Casablanca
Liberating the Ritz
The first martini film
The role of the martini in movie-making
A martini matinee
'The orchestra is playing yellow cocktail music...'
Canapés
Scuba and Martini's Law
Mademoiselle and the doctor and the martini
The cocktail dress
The whole question of the drinks' cart
A new drinks' trolley
The souls of animals
The thirteen awarenesses
The mysteries
Where are they now?
Memoir of a story: Story of a memoir

End Pieces
A letter to my drinking companions around the world
The classic martini
Acceptable variations and close relatives of the martini
Martini music
What is this demon? Alcohol and the art of drinking

So much good stuff here. Where to begin?

Deliberation is one of the ingredients of the martini... To care about the martini shows that you know what it is that goes to make that which could be called, in life, fine.

In life, there are drinkers and there are martini drinkers.

The gauge of a sophisticated household is the number of glasses it possesses which are appropriate to the beverage.

Among many interesting snippets there is this one: Malcolm Fraser was (is?) a martini drinker. Apparently he takes a swig from the bottle of gin, replaces it with vermouth, shakes the bottle and puts it into the freezer for ready-made martinis.

More snippets to follow.
Posted by Melba at 4:52 pm 18 comments:

This is an article found at Food Republic
By Chantal Martineau 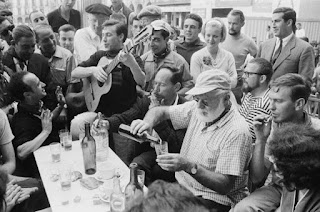 You may have heard: Ernest Hemingway enjoyed a tipple or two. In fact, the iconic writer liked his drink so much that another writer, Philip Greene, was inspired to pen To Have and Have Another, a book about Hemingway’s drinking habits and the libations that wove their way into his works. When Greene is not reading or discussing Hemingway, he is stationed at the Pentagon, where he works as a trademark lawyer for the Marines. A longtime Hemingway buff, he became interested in cocktails while researching his ancestors in New Orleans, including one Antoine Amedee Peychaud, the pharmacist who invented Peychaud’s bitters. Eventually, Greene co-founded The Museum of the American Cocktail. His book answers, among other things, the burning question: was Papa really the boozehound he was so rumored to be?
*

I think what I love about this is his sense of ritual. The making of ice from tennis ball cans; the freezing of cocktail onions and glasses. I'm sure he would have cared about the shape and size of the martini glass, the length of the stem. Comme moi.

There is such pleasure in rituals and for those of us who aren't religious (yet who may hypocritically enjoy a bit of churchy stuff like stained glass windows, Christ-on-cross paintings and beautiful hymns) we can also find them in drinking, eating, bathing, sleeping, organising our cans in the pantry and making sure all our coat-hangers face one way in the cupboard. If you can call it a ritual, maybe it's more socially acceptable. No I don't drink my vodka out of the bottle, I like a nice glass, look at me I'm civilised.

This is still me today, but on the inside

I have a literary agent who likes my novel and thinks she can sell it to a publisher.

I don't think I have EVER been this excited but I am really, really calm. Inside I am doing that arm-waving-dance that Kermit the frog does. 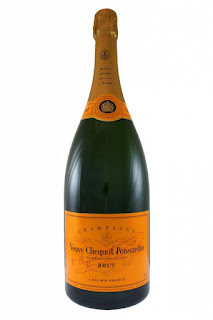 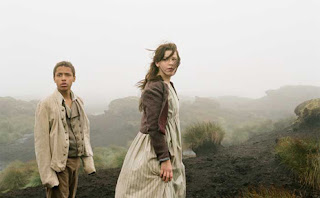 And what a difference 35 years makes. I was a schoolgirl in love with this book but now, NOW...