i remember seeing this on tv when i was a kid.

the song has never left me.

the power of the almighty tube.

Email ThisBlogThis!Share to TwitterShare to FacebookShare to Pinterest
Labels: nostalgia 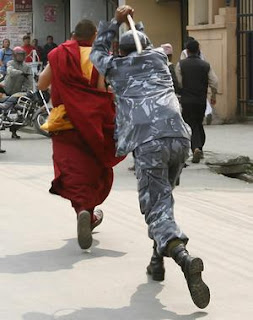 Email ThisBlogThis!Share to TwitterShare to FacebookShare to Pinterest
Labels: hurting

is there something really different about whether you live north or south of the river?
i know the cooler young people live north of the river.
but i reckon the cool older people live south. in st. kilda.
i hate st. kilda on a weekend. and even a thursday night.
give me st. kilda on a wednesday morning about 10am, when the grand old dame is empty of tourists from other suburbs, and the dirty footpaths can be trod by me and my dog.
or on a school day, in the afternoon, about 5 o'clock when you can be coming back from the park, and be stopped by an old man on a door step in a back street. he is wearing a singlet and has skinny arms and legs, which poke out of baggy shorts.
hello, he says. what's your name, son?
small boy looks at me.
i smile and tell the old man.
you any good with that footy, son?
yep, you bet, he's good all right, i say.
you gunna play for any league when you're older?
small boy looks at me, then at the old man
collingwood, he says in a small voice.
argh, no! you need to play for geelong!
that's what i think, i say.
anyway son, you make sure you don't let anyone push you around, you have to learn to stand up for yourself.
the old man is emphatic about that.
we say goodbye and the small boy with me asks if i know the old man.
nope, i say. i just like to talk to people if they talk to me, especially old people.
small boy is confused, i can see that. after all the lessons of not talking to strangers etc. i can see his brain spinning.
you can't talk to people on your own, but when you're with me, you can.
he accepts this logic and sees that it is right.
and he was right, i say, that bit about standing up for yourself. it's something we've all got to learn.

* * *
but this morning, i am with white dog, not small boy. we skirt the grand prix mess [shakes fist and curses] and walk along canterbury road. then we cut in along the street with a hotel on one corner and a bike shop on the other; we walk down to the beach. then back along towards st. kilda to the place where the dogs can swim. year round, any time of day, off lead.
it is magical. 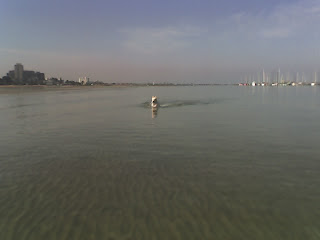 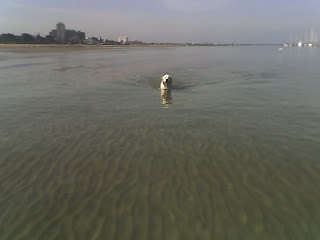 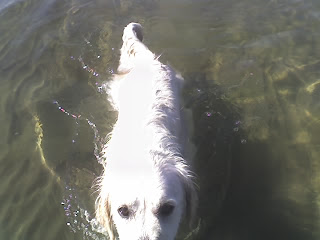 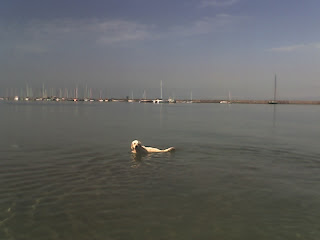 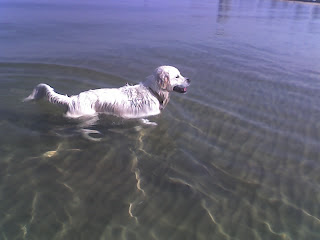 * * *
after the water we cut back up through catani gardens, the grass is so dry. the notice for the laughter club is in the bushes at the base of the rotunda. the meetings are every saturday at 10am.
we walk up fitzroy street. street cafe is behind us (best seafood pasta and great service) as is the spanish restaurant, can't remember the name, but enjoyed it years ago.
they are putting the tables out at di stasio. gigi makes a beeline for a man walking towards us and gets in front of him. i tell her to watch where she's going, and as i walk on, i feel the man thinks i have just shouted at him.
there's a man with hoodie on the nod on the steps of the prince of wales. the 711 does not have the annoying "street performer" out the front, who is frenetic and quite threatening when you walk past in the evening with an ice-cream and kids.
there is an old man with his pants too high, and another hooded junkie coming towards us. we are in the badlands, the bit in the middle where it's most interesting, where there's still a little bit of colour and grunge and you can have an ice cream at cold rock and there'll be an aboriginal family sitting there wanting to give your dog left-over pizza crusts, and you talk to the kids, and your kids talk to their kids, and they all pat the dog - the great leveller - and that this can happen in the city is to me great.
the george is shut. and the underneath pavement bar is advertising for staff. there is no witty blackboard out the front saying "drink more beer" or "beer is life" or anything like that. [note: this blackboard shtick has been copied all over; this place did it first, and it was the manager phil years ago who instigated it. i don't think he's still the manager.]
people at the st kilda grocery bar, always are, i don't like it too trendy even though i have to admit i have been there though not recently and i had an exchange with the very scary alannah hill, who suggested that her then-toddler son had taken a shining to my slightly older princess, yeah, they should totally get married, "older woman" giggle giggle, etc.
gigi stops for a drink at cafe banff, they always have water out the front. banff has gone down-market but in a good way and i reckon is the only place, the ONLY PLACE on fitzroy street which has cultivated a north-river atmosphere. almost. it is really cheap, good food, but the wine comes in tumblers. i'm trying to deal with this.
then there's d. chirico with those gorgeous salesgirls, kate is the cutest and the sweetest, she has red hair normally but she's dyed it a light-choc brown, and she also has the best dresses.
then up past the japanese restaurant, struggling now i suspect - it used to be packed 8 years ago when it was the new kid on the block; now there's always the same man sitting outside drinking wine.
the salon where they wax you; you can choose to either have a spunky turkish girl, deriye, or a man. i saw a man sitting at the counter this morning; he is chubby with funky specs and bald. when i had deriye working on me, oh too long ago now, must make an appointment ey? she said he's a great waxer, when i asked whether women booked a session with him. i just don't think i could go there, he's not a gynaecologist after all.
then we have the big three: a taglio, with the best pizza by the slice, and the best blue-swimmer crab with a bit of red chilli, garlic and thin spaghetti. then bar corvino which has come up in my estimation - used to be bad, bad, bad. i had a bad breakfast there once years ago, my girlfriend had mouldy orange cake one night after the movies and my mother always talks about the time we were in there, and they had possum on the menu. personally, i don't think possum on a menu is a bad thing, but she obviously does.
next to bar corvino there is bar roy. i don't like bar roy - it's cold and impersonal with plastic chairs and a big kind of cavernous space. but the biggest reason i don't like it is it used to be cleopatra's, where you could get ace lebanese food and the owners would all make a fuss over princess and give her free baklava, and she would run in to say hi to ozzie.
at the moment, however, you can go in and have a drink with two corvettes. or were they lambourghinis? i don't remember, i don't even know how to spell those cars.
then there is the new chinese restaurant, mah jong, with impressive decor and an even more impressive review in the age a couple of months ago which mentioned that the young owner was waiting on tables. i will go there one day but somehow it looks just a little too new at the moment.
and then soon we are home, where the gigi gets rinsed under the hose and parked out on the balcony to dry off.
and i eat rice with mushroom salad.
Posted by Melba at 12:12 pm 5 comments:

channelling elaine benes for a minute

remember that seinfeld episode when elaine thought that a cafe owner was only hiring large-breasted waitresses? and it turned out they were all his daughters.

well, has anyone else noticed that baker d.chirico only hires sales-girls who wear floral, 1940s dresses and who are all really quite pretty, with rabelaisian hair?

there's none of this: 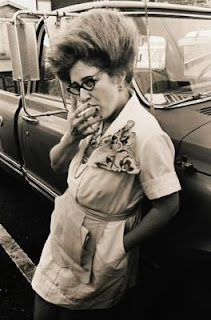 was it ernest hemingway who talked of the black dog? it was his depression, and i wonder if he imagined it lying at his feet under that table in havana, or at the door of harry's bar in venice. sitting patiently, waiting while ern finished his cigar or pernod or toasted cheese sandwich.

i don't have a black dog. my thing is a monkey, that sits on my right shoulder, and incessantly chatters, and tugs at my hair. mischievous little shit.

how do i find a way to quieten the monkey?

my days, my waking hours, are filled with all the normal stuff that people have to do to get through their lives. there are things to do with food, washing clothes, tidying houses, vaccuuming floors, picking up papers, making sure there's only one green guide on the coffee table. changing bed linen, collecting mail, walking up and down stairs. supermarket. butcher. baker. candlestick maker.

all the relationships must be maintained. you can't just throw your hands up in the air and say "fuck it."

but against all this, or with all this, there is a multi-layered and many-machined grinding of activity that is my brain.

this is where the monkey comes in. he sits there on my shoulder, and feeds me the thoughts. he picks them up out of the air, pops then through my ear into my brain. and there they start spinning. so on top of all that other stuff you have to do, pay bills, have sex, watch quality television on dvd - oh my god hands up who has watched love my way? - so on top of all that, i have my brain going a million miles an hour, jumping across topics, flitting all over the place.

i can't say none worked, but an hour at meditation is good. i can clear my mind and try to, really try to, keep things quiet and calm. but then i walk out and go head on into the rest of my life.

i have to find a way to make the monkey still.

does this sound like i'm going mad? really, i'm not going mad, i'm just waking up.

the hangover hell that is ikea 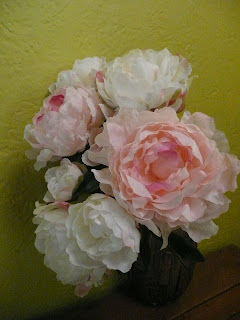 what is worse than going to ikea on a sunday?

GOING TO IKEA ON A SUNDAY WITH A HANGOVER.

what is worse than going to ikea on a sunday with a hangover?


GOING THROUGH IKEA TWICE ON A SUNDAY WITH A HANGOVER.


i had to go back and get the fake peonie roses from the display vase - yep, lifted them out of the vase in the show room, grabbed the label/price thing too, then went all the way back through, lined up again with the million other people, and got them. 5 very pretty fake peonies for $20. usually the nice looking ones are almost $20 per stem, which is what has always put me off.

it was worth it, they look gorge.

hope you are all ok.

i'm never drinking again. what a stupid fucking night, i'm ashamed of myself.
Posted by Melba at 6:38 pm 6 comments: