I wrote a book review and it almost killed me

It's like, how do these people do it for a living? I suppose they get into a groove, they know how to do it, they are paid to do it, and they get better the more they do it. But FUCK, talk about hard work. First you're worrying about if the author reads it, and if the publisher reads it. Then you worry if you seem like a dickhead. And THEN you worry about not making sense.

Writing fiction is much easier.

The problem is on my 'writer website' I have set myself up to do these things. I have put it out there that I want to do them, want to learn how to do them, and will do them. I put this one off so long it was ridiculous. The other stupid thing is I said I didn't want to do superficial reviews, I wanted to get meaty and in-depth.

So now I can't even just do some trite ones to tick the box.

All I can do is do a few, but every so often. Do them right, but not frequently.

I mean it took me ALL DAY.

(Not wanting sympathy or someone to advise, just wanting to complain. Thanks!)

Hope everyone is good, and that no one is writing a book review. Just read books, don't worry about trying to work out what it is you do or don't like.

That time of year again TIME FOR THE FRENCH DINNER

Tonight we have our annual French meal, as part of the Tour de France obsession I share with my brother-in-law and now my daughter, and which is secondarily tolerated/shared by my sister and my husband, Clokes.

We have our French wines, our non-French cheeses (fuck that, they're too expensive and no one ever really loves them anyway. Let's face it, compared to a King Island Quintriple Brie or a good old Castello Bleu, you can't beat that?)

They are doing main, I am doing dessert and in about ten minutes (as soon as I've finished my Internet Ablutions) I'll decide whether it will be cherry clafoutis or tarte tartin.

This year I'm dressing in yellow. Need to pop to the op shop to try to find something that will complement my yellow cardigan. I told Clokes I am wearing 'as all yellow as possible' and he said: Great, I'll wear my red, white and blue striped top (that we got at 'Tomy [sic] Pony' in Hong Kong. Not Polo and not Tommy Hilfiger - a kind of blend, you know. He knows I hate him wearing those 'fucking polo tops' but he also knew I couldn't say anything because he'd mentioned the tri-couleurs. Smart.

It was quite the big week. I had four teaching gigs, including a new school (primary) and then secondary schools. Thursday was a big day, taught back to back 8.40am to 1.30pm with an hour off in the middle which was cannibalised by me driving home in between, grabbing some fruit, refilling my water bottle, going to the toilet, offloading some materials from first sessions and getting back in the car. I know you love these details; I'm here for you.

Then yesterday I spent ages online working out which Melbourne Writers Festival sessions to go to. The last few years nothing has interested me but this year, fuck. There are HEAPS so I have booked for a bunch of sessions and if I go to the Trivia Night and the Closing Party (unlikely) I'll attend 16 sessions over the ten days or whatever it is, mostly two weekends. Man.

I also might have some writerly news in the next couple of weeks. Not to do with the book, but something short storyish. I've been shortlisted in a local thing which is a big deal, with a wide-circulation. Publication is 'likely but not - as yet - definite' so I am excited, I have cracked a bottle of The Widow to celebrate the shortlisting, but I'm trying to keep it low-key until I have confirmation.

But likely to be published? They wouldn't say that unless it was, er, likely, would they?

Better go and look at the recipes. This was my week, how was yours? What are you reading? Are you happy? Are you wearing yellow? How is the weather? Any holidays on the horizon? What do you think of the POLITICS AT THE MOMENT? Or should we not go there. It is quite the exhausting subject and as I've demonstrated above, it's possible to live in the light and keep things happy.
Posted by Melba at 12:58 pm 20 comments:

I'm back, and talk about feral

1. I have a dreadlock and while that in itself is pretty rank, what's even ranker is I didn't realise until yesterday. YESTERDAY. This is a thing that's as thick as a sausage and is so tightly bound up it makes that section of my hair look a full 4 inches shorter.* Today I intend to get in the shower with plenty of conditioner and a wide-tooth comb. And take care of it. I promise.

2. I have no clean underwear. Which means I own precisely 15 pairs of undies.

3. I just realised both my bras need a wash too. And I'm teaching in two days. And I've already done three loads of washing. Maybe I can wear my sports bra.

4. My bowels were bad for a full ten days then they started to go to normal, very quickly. The good thing is that I didn't drink alcohol for that time. The bad thing is I couldn't try the Tuna Tartare and artichoke salad until yesterday.

5. I didn't get sunburned which is good cause I'm getting a thingy cut out on Friday from my back. It's the second thingy, it's not a bad thingy, just one of those basal cell thingies.

6. We watched the Tour every night on the Eurosport station. Commentators Carlton Kirby (come to think of it, I didn't get to see what he looks like.) To google...

Hey, exactly what I imagined.

And Sean Kelly, we did see. He is hilarious and made us laugh every time he was on.

That's Sean on the left below, he rocks when he speaks and does not have eye contact with anyone other than the road when he talks. We love him. On the right hand side is the unintelligible someone else who does interviews and then there's a really annoying girl who gets flirty eyes with the spunky riders, especially Marcel Kittel.

Princess loved sprinter Sagan last year but has dropped him to go for Kittel. I think this is partly because Sagan has a bad facial hair situation going on, and partly because Kittel looks like this: 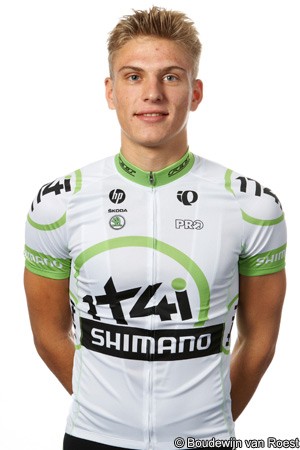 Princess: He's a hot Aryan. I love him.

The other big thing was we realised that Cadel's chin cleft is angled which is very disconcerting. I am still hopeful he will 'do something' but Princess has moved on.

So tonight we have to make do with SBS, and two hours later. It's going to be tough but I'm determined. This week is mountain week and it will be exciting and then on Saturday we have our usual TdeF meal with my sis and bro-in-law all the talk is chamois and sticky bibons, who is pottier (Carlton versus Phil Liggett) and who has the calves which can best be compared to the size and hardness of frozen chickens (probably Andre Greipel.) We will eat, I think, duck cassoulet, eat some French cheese and drink some French wine. Dessert is undecided but I will let you know, bien sur.


* I had dreadlocks in my early 20s for a period of about 6 months. I just stopped brushing my hair and kept washing it and they started. I thought I'd have to get them cut out when I was sick of them but in fact managed to comb them out. It took all day, in sessions, and much patience. When I told this to Princess she almost gagged and physically recoiled when I made her touch my dreadlock.