It's Friday and I have a headache. Have had for a few days, and feeling a bit off. I blame the reduced dose of Vit D! I have to teach, will get through it, and then tonight Clokes is taking me somewhere fancy for my birthday (which is next Monday, oh yay me.)

Tomorrow I'm hosting either a lunch or dinner for my birthday (time non-specific as I wait to hear back from my sis who is on school camp and without phone reception it seems, until maybe tonight when they are 'back at base'?) I'm hoping she can come and we'll make it dinner if so; if not go ahead with original plan of lunch. Reasons why: I can't be bothered explaining but be assured they are dull and not important.

I have no agent news yet, but today is Day 9 and tomorrow Day 10 - allowing for time difference - and she said it would take her a week to 10 days. I told her not to rush, so who knows? Maybe Sunday.

Princess has finished her exams and today has an oral presentation. She has results day Monday and Tues a Group 4 project (some IB thang) and Wednesday final assembly and then Prefect meetings. Did I tell you she is a Prefect next year for Year 12? And then she goes to Turkey next Saturday for 2 weeks. Did I tell you that?

I'm planning a petite getaway with my mum, to Malmsbury to visit an old school friend of hers who is also my godmother - yes, this staunch atheist was christened and has godparents - unbelievable right? we'll stay one night there, and then the plan is to go to Ned Kelly country and stay 2 or 3 nights there. I can do some writing, mum can read and meditate. We can go for small walks, drive around. It'll help distract me while Princess is away. Make it less like the last Waiting for Princess Vigil. What a time. Here's the link for people who weren't around then. She was just-turned nine and went to the US on her own for three weeks with her Dad and her dad's then girlfriend. (I may have put some of the posts into drafts, they might not be there because at that stage I had this blog linked to from my public blog. I keep changing my mind about that too.)

So it's coffee time, I'd better go. Melbourne's weather yesterday was shit - rained all day. But today looks dry. Who the fuck knows.

I hope everyone has a good weekend.
Posted by Melba at 7:57 am 10 comments:

Email ThisBlogThis!Share to TwitterShare to FacebookShare to Pinterest
Labels: Friday wrap with lettuce

The thing, it be done

Well, I sent off my manuscript to the agent. She said she'll take about a week to ten days to get back to me. Am I shitting myself? Yes. Do I feel relieved? Yes. Can I stop checking my emails? No. Will I die if she doesn't like it. Yes.

On another matter, the act of reading. I am learning more and more that reading is such an intensely personal thing. For a long time I didn't really think about it, or if I did, thought the above sentence meant that people will choose different books to read, and like different books, based on individual taste. What I'm learning is that even when people read the same book, it's a different experience for everyone.

Exhibit 1: all the reviews I've seen for Barracuda are either glowing (Peter Craven) or reasonable.

Exhibit 2: yesterday on twitter I saw a thread of people BAGGING Donna Tartt's The Goldfinch. When the week before I'd said how much I ADORED it.

I told my mother about the second thing.

Oh you don't have to read all that, do you?

(Maybe she thought the twitter people were conversing with me, and disagreeing with my take on the book. I don't think she gets twitter. Fair enough, many don't.)

They weren't talking to me, mum, I said. They were talking to each other and I was eavesdropping. Twitter is public like that.

Oh, she said. (We had just been to a talk on the Cult of Wagner, ft. The Ring Cycle, more about that later) and I was in her place borrowing some hideous '70s stuff for a themed party coming up. I was also having two spoons of Maggie Beer's Passionfruit ice-cream, which mum had in the freezer and had mentioned as we were driving hom.

Back to the twitter thing. It's true that if I say I don't like eating fish, and you do, neither of us find it an insult. But if you say you hate The Goldfinch and I say I love it - because somehow it's connected to either intellect or judgement - it's possible to get your nose out of joint. Yesterday, reading the thread, didn't bother me but it did fascinate me. They used the word 'hate', they said it read like a first draft and was filled with 'howlers'. I was too scared to ask what a howler is. Is it a mistake? Is it something that is cringingly badly written? Both?

I wanted to intellectualise my response, and theirs. All of them were young, under 30 I reckon. Whereas me and Tartt are of a similar era. Actually just looked her up, I'm precisely 3 weeks older than her. So we're twins.  The books we've grown up reading, particularly the maximalist 19th century novels such as Dickens, whose works her book echoes and who she read as a child and young woman, and for John Irving, reading him as a teenager/young woman, and Irving was influenced by and loved Dickens, I wonder whether that context has something to do with it. We love to read what is familiar and comforting. If we can have comfort food, why not comfort reading? I like different and new but the books I can really get lost in and forget I'm reading, are books like The Goldfinch.


And so, to The Ring. Last night the Wheeler Centre hosted another event (I've been to a bunch lately) and it was Julia Zemiro talking to a bunch of people about Wagner's The Ring Cycle. (Bunch of people being director Neil Armfield, foodie Maggie Beer, poet and writer Peter Rose and arts-theatre person Robyn Archer.) It was a chat about the cult of Wagner and how some people (like Rose) are just nuts about The Ring Cycle. Mum is going, she got last-minute tickets after thinking it had all been sold out. So she's thrilled and excited and I'm wondering how she could possibly sit through 18 hours of opera when I have fallen asleep in a normal show (Carmen, late '80s, not my bag baby.) What fascinated me was the way people talk about this production, and the stories attached. Rose spoke of seeing it in Germany and the performers almost staggering around on-stage, swilling from water bottles as they performed. Archer spoke about the audience applause - for the performers, for the orchestra and also for themselves for enduring the thing. Characters like Brünnhilde and Siegfried, and Valkyries. Well, I do have a thing for German characters and the language, and while I don't have a thing for opera, I am going to find out more about it. It appeals.

If anyone is interested in reading more of what Peter Rose has to say about it, here is an article in the Australian Book Review.

But it will have to wait, because for now I move onto the next project, a novella which is Bladerunner mixed with Helen Garner's The Spare Room. I'm excited because it's not like the previous two (let's call them my 19th century lyrical novels). This is realist and short and in the first person. As Borat would say, wa wa wee wah.

CONGRATULATIONS Sarah. How does it feel?

I've been thinking of you tonight, at your launch. I'm sure it went brilliantly, and look forward to hearing all about it.

Yay Salt Story by Sarah via A WineDark Sea. 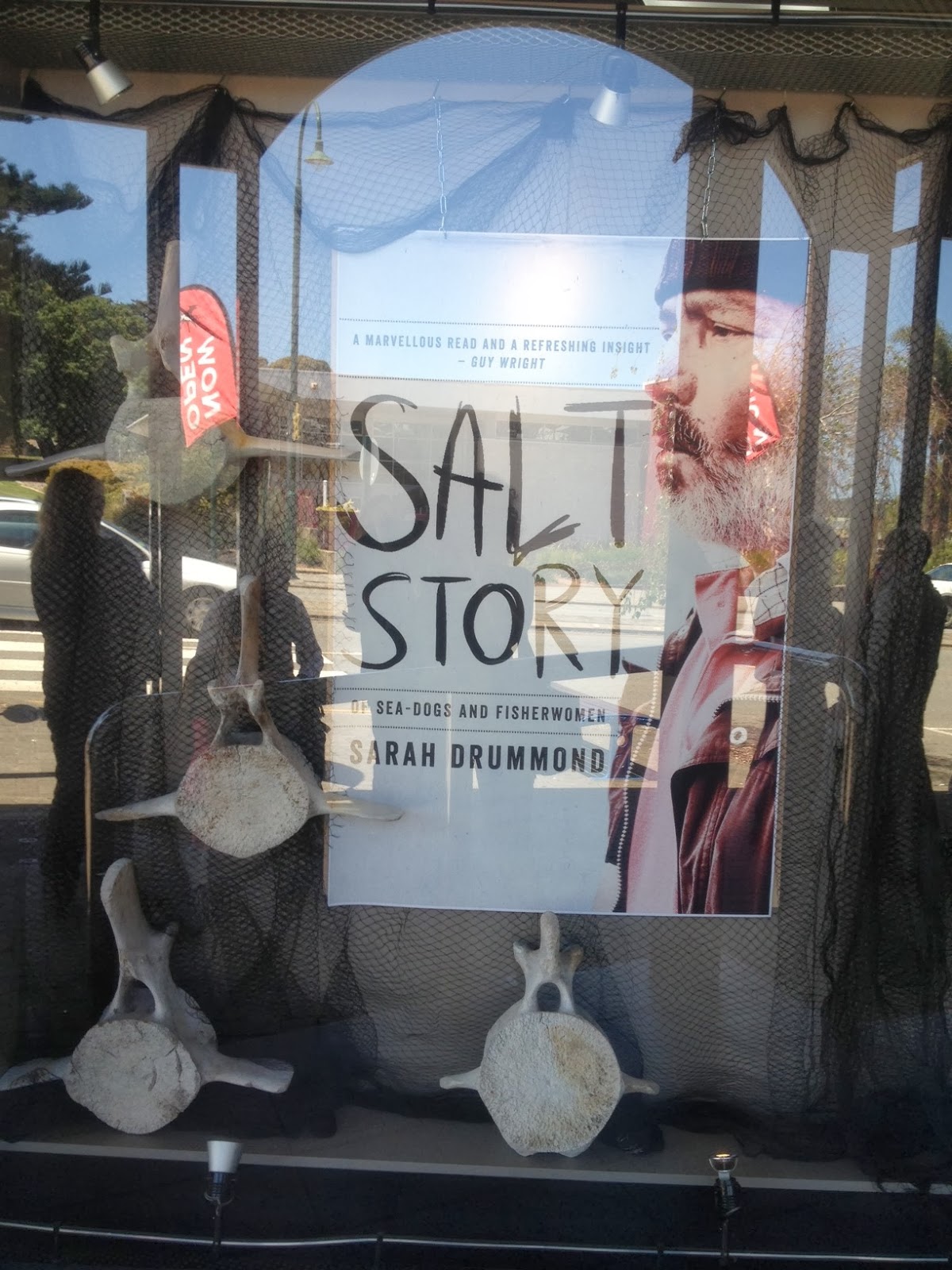 So what do we think of Winton generally and has anyone read Eyrie? There seems to be a bit of Winton-bagging that goes on in this country, I'm not wrong am I?

I'm trying to work out what it might be about him. Is it the ponytail? Is it the success? The blokeiness and the fact that he doesn't seem to give a rat's arse about celebrity and fame.

I'm wondering whether we need our heroes to be failures? A la Kelly, Burke & Wills, Eureka. Sports people who always come unstuck (off the ground is okay, on the ground is not.)

What is it about us as Australians that makes us want to tear successful people down? Are other nationalities like this?

And in other news, went to the beach yesterday god it was lovely and quite surreal to be there in the warm sun, in bathers, while today back in Melbs it's cold, wet and 16 degrees.
Posted by Melba at 12:06 pm 18 comments: