happy, fun, good, romantic, tipsy, full, lots of dishes, watch big brother, when will we do the presents, two slices of cake, evil-red berry juice, presents? champagne, hear hear to the future, oh what a good husband be he, but why am i on the computer while he does the dishes?


and sadness, end-of-an-era oh why do things have to change, i like things to always stay the same, people always there and nothing moving on. because i always, always find it hard to move on and say goodbye.

i'm not sure what i think about the goings-on in sydney with the photographs being removed by police from bill henson's exhibition, and the news that charges will be laid.

but my thoughts are:

1. i guess if he wanted to depict something special about vulnerability and youth, he could have used a scrawny, under-developed 18-year-old model.

2. it made me feel uncomfortable, while looking him up on the internet, thinking i might inadvertently download something "unacceptable". all in the name of research doesn't really cut it, hey pete townsend?

3. a quick google trying to find american photographer sally mann - who has had her share of controversy for publishing photographs of her children naked over the years - showed me that there have been court-cases in the states where parents dropping off rolls of film to be developed at k-mart and the like have been arrested and charged with child pornography over photos of their children naked.

4. don't all parents take snaps of their babies and kids naked, and in the bath, and rolling on the rug, and at the beach?

5. when i was a teenager, david hamilton was incredibly popular. hell, he was to the poster, card and calendar business in the '70s what anne geddes and her pumpkin-hatted cherubs was to the poster, card and calendar business in '90s. the girls used to love his photos, which were dreamy and romantic, shot through vaseline-coated lenses and usually featured pubescent girls and boys in "various stages of undress." there was even a movie bilitis, and while that was soft-core porn, the posters of ballerinas in tutus and sylvan-wood-nymph boys in pastel togas were not sexually arousing to me, anyway. but then i was that age myself, and not some paedo.

6. i'm nervous about even linking the names david hamilton and sally mann above to any webpages because what you can see is possibly inappropriate.

Email ThisBlogThis!Share to TwitterShare to FacebookShare to Pinterest
Labels: culture

i was going to write a post about the on-going censorship by this council, against young artists. but i can't be bothered, i haven't got time to go through all the archives trying to find pictures of this and that.

but just remember. the artist who had the palestine/israel installation. painted over.

the recent one, with the nude man and mickey mouse ears. stopped.

which of the above three am i most comfortable with? the first two. the ones where the images are connected to ideas and attitudes. do we not have freedom of thought?

the one i'm not that comfortable with is the nude man one. i don't know where it was displayed or where it was intended for display. if in the street, then i agree that people who don't want to see naked people in a public space shouldn't have to. if in a gallery, or a room, or even a little-used alley-way or lane, then it should be allowed. what the hull?

and when will it be over?

ps and the whole thing about john so never wanting to upset china shits me as well.
Posted by Melba at 11:30 am 2 comments:

certain truths that must be faced:

2. princess has started calling me dude.

3. your hair will not look or feel any different no matter how many wonderful and promising words are written on the shampoo bottle.

4. hello, my name is melbournegirl and i am a poached egg addict.

5. the gigi is famous? a stranger said hello to her on sunday as we walked st kilda. and used her name. and we didn't know her. blogger, peut-etre?


6. watching the opening to simon townsend's wonderworld, it feels like i last watched it just the other night. this makes me feel a little bit happy and a little bit depressed.

who i want to be right now

i have always had a bit of a thang for john cusack. like the rest of the world. but because i'm a contemporary of his, my thing goes back to the first time i saw him in a movie.

and no, it wasn't say anything, the movie that people always cite as the movie they "discovered" and therefore for ever after owned john cusack.

but anyway. this post is more about the darling diablo cody than john. sort of. kind of. you see, she has gone from writing a blog, writing a book about being a stripper for a year, and then writing a screenplay for a movie that won academy awards a couple of months ago. i've been following her myspace page, and a recent offering was this:

there are just so many things i like about this video, this girl and of course, john.

1. the fact that they started chatting at some old function.

2. the fact that they stayed in touch. texting. calling. so sweet that he would do that.

3. the fact that she is wearing long, red socks and funny shoes, but she doesn't look try-hard.

4. the fact that she's got short hair at the nape of her neck, like me.

5. the fact that she mocks herself on her myspace page about the looks she gives the camera and that she fidgets in her chair like a romanian [attention-starved] orphan.

i think he likes her. the way he says "nice" after she describes her latest horror film project about a girl who literally consumes the men she seduces "she eats boys" is so telling. 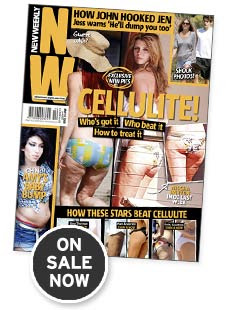 i have less cellulite than mischa barton.