1. Just did my nails. OPIs Cajun Shrimp. A gorgeous red.

2. Got some new shoes yesterday. It's Clokes' and my wedding anniversary next week. We are doing the traditional gift thing, and 3 years is leather. So he's getting himself a leather jacket and I decided on shoes. 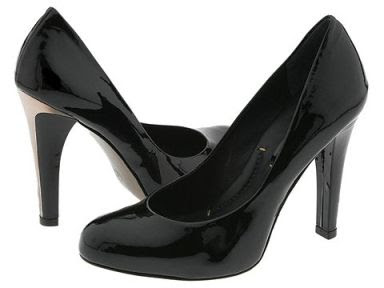 They're like these but the heel's a bit different. They are from Stuart Weitzman and nice.

3. Just finished watching Gossip Girl with my two girls. We have now finished the second season. Princess was having conniptions on the couch during the final episode. You know how these tv series creators like to play with your emotions.

4. We are up to date with Survivor. Happy Rupert survived. I think my kids think I'm revolting for saying that I find him quite fanciable.

5. Tomorrow we will watch some more back eps of Glee. Recently my dear friend Magical_M asked me who was my favourite character. I like lots of them, but forgot to mention Sue. How could I forget Sue? Earlier this week I saw the Season 1 episode where she visits her sister and reads to her. So tender and good. Love it.

6. Last night we had pizza and I really am not a pizza person.

7. I should put another coat of nail polish on.

9. We watched the first episode of Modern Family. It was a bit meh. Anybody else see it?


Deep and meaningful bits (some of these points probably belong above):

1. My mum's treatment is going well so far, thanks for everyone who's emailed, commented here or texted. I'm not going to bang on about it too much but will give you occasional updates. It's all a bit second-time-around and kind of boring in a way. (That sounds really callous, it's not.) We are planning a trip to Turkey in September, to take Princess to see Ali. I asked mum to come, so if it all goes well, that's what we'll do. A stop-over in Abu Dhabi maybe, and a side-trip to Prague. Oh yes please.

2. Geelong played well last night and poor Clokes was a bit devo but he took it well. My dad called me in the afternoon with a spare ticket and I had to say no. More than happy to be on the couch watching, with pizza, wine and then a Maxi-Bon to follow. I really can't be bothered with night games. They are so torturous. Though I once wrote an ode to a Friday night game, I really would rather be on red couch than on hard seat. And so, I can't see any real challengers to Geelong at this point.

3. I am re-reading Joe Cinque's Consolation.

4. Have stalled in the latest John Irving one. So self-indulgent and wordy. It's like he's too famous now so that either a) everyone is too scared to edit him properly or b) he just says 'fuck off' to editing. Or maybe both?

5. I am reading to my 13-year-old daughter again. I have decided to introduce her to the joys of Agatha Christie, especially the Hercule Poirot detective books. I lie on her bed at night and read to her. I do all the voices, she theorises (very accurately) about whodunnit, and it's all rather cosy and lovely. She still reads her vampire/fantasy books, but we have our little routine which both of us are enjoying.

6. I'm scratching around for another point. Might leave it there. Will try to diarise tomorrow but no promises.

I'm reading Family First by Dr Phil. English novels here are expensive and scarce in the library. To my daughter, I am reading Black Beauty - it's horribly wordy but she's still enjoying it.

I'm kissing my kids everyday and wearing fat clothes because I need to drop a few kilos. I'm drinking coffee like a maniac and eating cadbury dark chocolate - yummmm.

Hugs to you and your mum.

I had a lovely morning with my best friend who lives in Perth and was here for the weekend. Sadly, that's all the time we had.

But I came home and enjoyed doing VERY little on my Saturday while hubby was off geeking about.

I am reading "The Independence of Miss Mary Bennet" and very embarrassed about it. It's a what-if set 20 years in the future after Pride and Prejudice ends. I bought it because it's by Colleen McCulloch and I thought I should support an Aussie author for once. It's full of character inconsistencies and is not written in the same language which is grating. But it's crack!fic and I haven't wanted to stop reading it yet. But honestly, I've read better written fanfic by Buffy fans. :P

We're watching Stargate Universe, Masterchef (but HATE the ads) and lots of footy (though of course, the one game we WANT to watch this week Saints/Eagles is not on free to air and we refuse to pay for Foxtel). I want to watch Glee but Hubby's not having a bit of it, so I'm going to watch the eps I have when he's not around and see for myself what the fuss is about.

Tomorrow I hope will be clear and we will find a nice pub to watch the footy in. :)

Hello! Nice work by your boys on Friday. Nice work by my boys yesterday. I even went to the game... with a Carlton supporter. He wasn't happy. At all.

I like Sue too. I like that they intersperse her evil with some humanity. She's probably the most well-rounded character. But I still think Brittany is ace. Cracking one-liners.

In answer to your question about what I'm reading, well I am anxiously awaiting a delivery from The Book Depository as I've just finished The Book Thief by Markus Zusak and I Know This Much by Gary Kemp (his autobiography). Both ace in their own way.

Aside from Glee I'm really not watching much. Top Gear when I'm around for it is always a fave though. And the final season of ER but only cos one of my friends is in it (the Aussie doctor).

We're a little low fi here, not much is happening, just pottering on through.

I've just finished a dreadful biography (Peter Robb) about a really interesting man (Carvaggio), makes me mad when people who really shouldnt write get published, and then make loaded assumptions about how people behaved based on their own moral compass and then present it as fact. I am moving onto Dickens, much more reliable.

Showtime have been re-running Big Love and I've been watching that, its fascinating, I still cant understand what possesses intelligent women to think that its ok for their husband to have more than one wife (??), I've also been re-watching the Little Britain DVDs cause its funny.

The kissing bit - nobody at the mo, I've gone off blokes for the moment, May is a bit of a nigel-no-friends month.

Its getting cold, so I am wearing jackets.

I am trying to save some money for a holiday later in the year, the Turkey trip sounds like fun, I'm thinking of Mexico maybe, or India.

I had a bubble bath last night after Doctor Who, it was lovely but smelt of hippy crap - lemongrass, I prefer the pink one.

Hot shoes. Congrats to you and Clokes. Sad about yr mum I didn't know, all the best to her.

Reading Sotheby's: The Inside Story: so good about how dodge they are.
Marian Keyes, new one. (I know but I love her)
Some book called Best Friends
Slaughterhouse 5

Wearing ahem a tracksuit but it's new and new silver Nikes (I just went for a walk). Normally new leather jacket and leather boots. With a dress and thick tights.

I'm eating local mushrooms, ratatouille, chicken & couscous. Vegie lasagne. Soup. Homemade, of course. Went to Foxey's yest and had quail, mushrooms in vine leaves, tomato and feta, apple and sour cherries, so incredibly yum. With their sparkling which I love.
Oh and I bought Cathy's book on Foxey's and read it in the bath. Was pretty good.
My new lunch thing is nice bread, toasted cheese & tomato then you put rocket or baby spinach on.

Kissing a new boy when he shows up, which is rare, an artist. 1st artist in a long, long time. Only 2nd one ever. I wish I could tell you more but I'm not allowed.

Thanks for the comment on my blog. I replied by email since it would be ambitious to assume that anyone is checking my blog frequently right now. If anyone is, I apologise (for the failure to update more than once a year).

I have been attempting to read Robert Jordan’s “Wheel of Time” series. The first couple were good but I’m on the 10th now and it seems like several books since anything actually happened. I think there will eventually be 14 books in total, but I am only continuing to read them out of sheer bloody mindedness.

I am re-reading Pride & Prejudice and The Time Traveller’s Wife to break up the monotony.

I am addicted to Survivor (as ever) and sort of enjoying the Amazing Race. Mostly I am re-watching the West Wing (currently on season 3, dreading the one where CJ’s boyfriend gets shot). Season 7 of the Gilmore Girls will be next.

Kissing my lovely wife and our very cute boys, wearing the same old Jeans West jeans and the T-Shirt I bought in Penang in 1995, and eating too many of the freddo frogs that I’m selling to raise money for the local kindergarten.

I went and re-read your Friday night haikus. Excellent.

Reading: You Are Not A Stranger Here by Adam Haslett. (Short stories.) Also the personals on Craigslist, which are incredibly addictive.

Watching: Glee. (Kurt's my fave. To wit: "Mercedes is black, I'm gay. We make culture.") Finished the last episode of Six Feet Under a couple of months ago and still feeling really sad that it's over. (I think it officially ties with Twin Peaks as my favourite TV show of all time.) If you haven't seen it, you've gotta get the DVD! The characters feel so real to me. I actually miss them. I've never had that experience with a TV show before.) (But book characters, yes.)

Hi, I do believe this is a great blog. I stumbledupon it ;) I will revisit
yet again since I bookmarked it. Money and freedom is the best way to change,
may you be rich and continue to guide others.
Also see my site - Perth

Hey there! I've been reading your website for a long time now and finally got the bravery to go ahead and give you a shout out from Austin Texas! Just wanted to say keep up the great job!
my web page > click through the following website

ӏ've been exploring for a little bit for any high-quality articles or weblog posts on this sort of space . Exploring in Yahoo I eventually stumbled upon this web site. Studying this info So i'm satisfied to exprеss that
I've an incredibly excellent uncanny feeling I found out just what I needed. I such a lot for sure will make certain to do not omit this website and provides it a look regularly.