I am not a natural

You know how there are some things that you are a natural at?
I'm a natural eater, writer, gadabout, teacher, cook and imbiber of wine. These are things I think that I do well, with little or no formal training.
Then there are things I am shit at, and no matter the help I get, or the study, the effort, the brain-power that is invested, I am still shit at it.
For me, one of these things is maths. Another is that I find it very hard to read sarcasm, or irony in a face-to-face situation with a person I don't know. This is because I'm naturally gullible and trusting (another "natural ability" of mine) and so I don't pick up on the cues.
Another thing I'm shit at is money. Oh, don't get me wrong. I'm good at spending it, but can't save for the life of me, can't budget, can't understand where it all goes. Connected to this particular anti-talent is my shit abilities at navigating what normal people might find ordinary, every day stuff. Like paying bills, remembering to get milk and understanding why, but why do we have to do things like do tax returns, change light globes and clean the oven. I just want someone else to do all that stuff so I can do the stuff I like. Because the stuff I like is incredibly demanding and time-consuming. And all that other stuff just seems so uninteresting and not "important."
But the thing that I am most shit at in the whole, wide world is sewing. It has been this way forever, I have always been crap at it; in fact it's one area of my life I've shown most consistency. Even the simplest, easiest task that involves needle and thread, I WILL FUCK UP.
Now, I'm not a stupid person. Once I did one of those thingies that told me I could be in MENSA.
But I can't sew.
I know why it is. It's a blend of impatience, lack of skills and bad maths. My genius lies in tangential lines of thinking, being able to find patterns and abstract forms of logic. All the things that maths isn't. I'm not terrible at maths the way some people are, but it's hard for me to visualise things spatially if they are not right in front of me. So this, combined with possibly a kind of sewing-trauma induced phobia means that whenever I try and sew, I fuck it up.
Evidence of avoidance:
When I was at uni the first time, instead of trying to sew a seam that had come undone in my nice cardigan, I used a million little safety pins to pin it up. AND IT WASN'T THE LATE '70s!
Buttons I can manage, but that's taken me thirty years to "master" and I'm sure that a pro would snigger at my buttons.
I just can't sew. I'm hopeless at it, I really am.
Recently I decided to take up my own pants, now we have a sewing machine and all. How hard could it be, I thought. I can do it. I'll just take my time, be logical and work it out properly.
First I tried on the pants, took them up with pins to the length I wanted. And because I'm SMART and I think of all eventualities, I tried them on with really high heels, and then again with flats to get the best length. I double checked. Then, when I went to cut the pants, guess what I did. I moved the pin, which had been holding the make-shift hem in place, let the bottom part of the fabric drop down, and put the pin back in the same place.
WRONG. WRONG. WRONG.
ThankfullyI thought it looked like heaps of material to be cutting off so I didn't cut that much, but even so I could only make a tiny hem rather than an elegant cuff, so basically, I fucked the pants. They are ok, they are wearable, but they are not the hems I wanted and planned.
Then the actual sewing. It was fucked. I used white cotton on tweedy black and beige pants. I was in a state, a lather. But I get so stubborn that I don't stop, I just push on, and I ended up breaking the needle on the machine, finishing by hand IN BLACK COTTON, it was a disaster. This was less than a week ago.
SO, now I have set myself a project to make curtains. And not just easy every-day curtains but lush, bordello-style velvet curtains with a heavy lining.
Luckily, I've had some help. When this project stalled recently, the Lovely Elaine offered her help, so yesterday I went around to her house and in a couple of hours, she made a curtain. I took notes and watched closely and then slipped her a few shekkels to pay for her expertise. Here is the result: 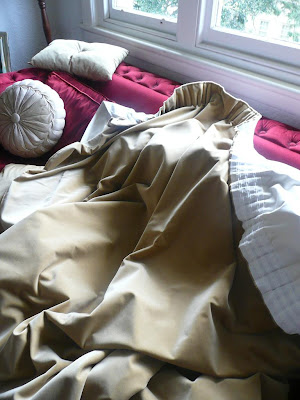 It's not hung yet, obviously. I need to keep it down as my model. Elaine's seams are so straight, she has no loopy threads underneath and it didn't take her a whole day just to cut any of the fabric or lining. She is ace.
Today, all day, I have done the following:
1. changed the needle on the sewing machine.
2. figured out again how to put the bobbin in.
3. cut the lining into the right-sized pieces.
4. cut the other bits of fabric into the right sizes.
5. some test seams on off-cuts of velvet.
6. found it is quite hard to sew a straight line.
7. blushed when I remembered Elaine saying "how hard is it to sew a straight line."
8. found that the stitches are looping, so I've tried adjusting the tension but it doesn't seem to be helping.
9. been very relieved that I had decided to do some test seams on off-cuts instead of just plowing ahead and getting started.
10. blushed again when I remembered my mum saying "And you'll do some testing with fabric, before you start sewing the real thing?" and me saying "I know how to use the sewing machine!!" in an injured voice.
So my initial estimate of taking three times as long as Elaine has been revised. I think it will take me ten times as long as her to do one curtain. Maybe longer.
But for some perverse reason, I am being very determined about all this. I can't say the same for bills and tax and other grown-up things. Maybe because this is creative, I am determined to not let it beat me.
Anyway, stand-by for more updates as I go along this week.

Email ThisBlogThis!Share to TwitterShare to FacebookShare to Pinterest
Labels: ambitions, curtains, I suck at sewing, sewing

My mum is a great sewer, and I have sewer's envy. I can sew enough to "get by", but don't expect greatness. I get impatient and argumentative with the machine, but still come back for more. My lasting memory of my mother instructing me in the art of sewing are the words "You can measure a hundred times, but only cut once." And, yes, I can bide by her advice, and still fuck it up.

after you pin, baste. Basting is just a loose running stitch that holds everything together, and, unlike trying to sew over pins, does not break needles or cause puckering. trust me, the time you invest in basting will save you a lot of agony.
Baste in a bright coloured thread, then remove when you finish machine stitching.
If the stitches are looping, it may be the bobbin - check it is in place correctly, check it is feeding out in the right direction, or maybe get your machine serviced.
Good luck.

Oh, anonymous, who are you, secret person with knowledge? Thanks for your advice, but would you baste seams for curtains? And is that by hand? Why would you do that? My friend Elaine sewed the seams perfectly without pinning or anything. She is a marvel.
And it was the bobbin holder, I hadn't put it in the spot in the machine properly, I don't think the thread was feeding out properly.

And Cath, thanks for making me feel better about my lack of skills. I was thinking today about your mother's motto about the measuring and the cutting. Such true words and could be applied to most things in life I think.

There, there, Melba, don't be so hard on yourself. Sewing machines are REALLY hard to use. I know, I tried once or twice. I'd rather sew by hand - something I'm only reasonably competent at and I only sew labels onto things or take the odd hem up. But you can't do that for curtains can you?

And you have so many other wonderful qualities that more than make up for your weakness in maths.

Good luck with the curtains.

hmmm. I guess I've been sewing since I was about 5... maybe I have no perspective on the relative difficulty of seam sewing?

EITHER WAY: It was just LOVELY to hang out.